This page is full of spoilers, so if you're a player you probably shouldn't read them, or you should at least talk to your gamemaster before doing so.

The five known Pandora gates all look and operate in a similar fashion, though they vary wildly in terms of size, shape, and available destinations. The gates are built from some sort of stable exotic matter whose full atomic structure scientists haven’t come close to cracking. To touch and sight, however, the gates appear to be constructed from a timeless-seeming polished black metal with no signs of aging or wear and tear. Something about the gates’ physical composition makes them difficult to look at, as if the viewer cannot quite focus on their outlines. Some onlookers have reported feelings of vertigo and nausea, while others have insisted that the gate outlines move on the edges of their visions, as if the lines are reflowing or the edges are vibrating at high frequencies. Due to this disturbing feature, most gate sites keep the actual gate structures covered.

Structurally, the gates themselves are partially enclosed by an irregular spherical cage composed of black arms that are bent and angled in unusual ways and sometimes interlocking. When new wormhole location is programmed into the gate, these arms physically change shape, move, and reflow around the spherical gate area (suggesting they are made of some sort of programmable matter). The openings between arms are sometimes only large enough for a transhuman to enter, while others are large enough to allow a freight train of supplies to pass through. In many cases, large vehicles or equipment must be dismantled, carried through, and reassembled on the other side. It is suspected that the gate size could be programmable, but so far efforts to do so have failed.

All known gates within the solar system are located on the surface of naturally occurring astronomical bodies, be that a planet, moon, asteroid, or so on. None have yet been found without such a land-based connection (e.g., floating in space or in the upper atmosphere of a gas giant), though such gates have been found in other star systems. It is speculated that gates could be physically moved, but no one is willing to risk such an endeavor given the lesson learned when the Go-nin Group messed too heavily with the Discord Gate’s controls.

The arms comprising each gate’s spherical cage have an abnormal-looking organic-seeming growth on their exterior surface in some areas, patterned in entrancing twists, curves, and whorls that in fact adhere to perfect mathematical formulas. It took some time for scientists to discover that this growth was in fact the gate’s control systems, or so-called “black box.” The interface developed to interact with this system is what allows gate controllers to manipulate gate functions. 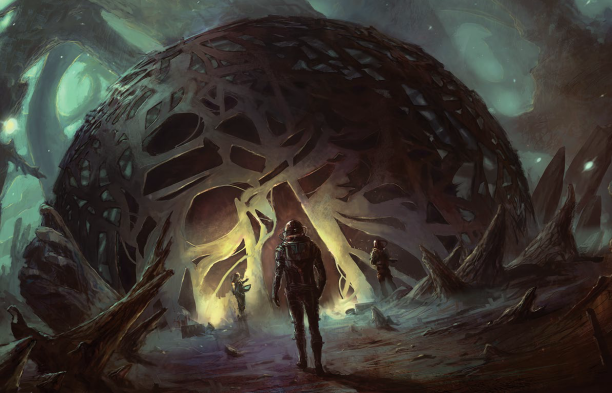 When the gates themselves are open, a sphere appears within the central area that is not so much black as pure nothingness. This sphere of darkness projects an aura of charged energy, and in fact ripples of green arc lightning cascade across its surface. Anyone or anything entering that sphere comes out the other side of the wormhole, through a similar gate, seemingly instantaneously. An unknown force field effect seems to prevent the atmospheres from the two connected gates from interacting.

Exactly how this wormhole is created is something that remains outside of transhumanity’s comprehension. The generally accepted theory is that each gate acts as an anchor, allowing the fabric of space-time to be folded so that two such anchored places can be brought together, ripping a hole open between them so that a person can simply step through. It is unclear whether or not these wormholes are all pre-existing, created when the gate was first established, or whether each wormhole is manufactured whenever the gate is activated.

Other more radical theories on how the gates function exist, though these are usually discounted as far less likely. One such theory suggests that the wormholes created are actually only zero-width Planck-scale connections across space-time and that no matter is actually transferred—only information. Instead, this theory suggests that anyone or anything entering the wormhole is in fact instantaneously scanned and disassembled and then their informational blueprint is transmitted as information across space to the other gate, which immediately reassembles an exact copy using some sort of powerfully advanced nano- or femtotechnology. Very little evidence supports this theory, however, and the disturbing implications it represents raises fierce opposition.

Only a few people know that the Prometheans played a key role in developing the interface for the gate control systems, achieving breakthroughs in understanding that transhumanity was incapable of achieving on its own. Regardless of their help, however, the gate controls have proven difficult, complex, and dangerous to use. Through trial and error—and numerous horrible accidents—the procedures for gate operation have become somewhat normalized and standardized, though unexpected complications are par for the course.

Each gate can be programmed to open to numerous extrasolar locations. In fact, each gate seems to have a pre-programmed “library” of destinations. New gate connections can be “dialed up” from this built-in list, though there is nothing that indicates what the far side of the gate will be like. Old gate connections are closed when a new one is dialed up. Extrasolar gate locations have ranged from habitable planets and moons to deep space to truly deadly environments such as the crushing gravities and poisonous atmospheres of gas giants and the coronas of stars. Researchers have attempted to distill some sort of recognizable pattern by the manner in which locations are listed and categorized, to no avail. Complicating matters, there is some evidence that suggests that the destination libraries sometimes change. More than once operators have been unable to recall the codes for previously accessed destinations, leading to the loss of several gatecrashing teams and colonies.

Entering a gate is like walking through a door, though it’s impossible to see anything beyond the gate’s surface. One moment you’re entering the black sphere at your starting location and instantaneously you’re exiting the sphere at your destination location. The true nature of the black sphere at the center of each gate is wildly speculated upon, and almost every gatecrasher describes a different textual experience.

The various hypercorps and factions in control of a Pandora gate engage in active exploration of extrasolar systems—an activity termed gatecrashing. The interests and procedures vary, but the Gatekeeper Corporation (and to a lesser extent TerraGenesis and Pathfinder) both recruit heavily for expedition personnel. Given the high casualty and death rates involved, finding qualified personnel can be difficult. There are more than enough infugees, poor, desperate, or thrill-seeking individuals willing to risk their lives if give the opportunity, however, no matter what their motivations. Gatekeeper operates a lottery system, whereby willing adventurers can sign up in the hope of their name being pulled to be sent on an expedition to a foreign point in space. Such gatecrashers must sign away all rights to any discoveries they may make to Gatekeeper, however, though the corp provides not insignificant rewards for certain discoveries, such as key resources, alien artifacts, or new life. One potent prize has yet to be claimed: finding a living, sapient alien life form.

In contrast, the Love and Rage anarchist collective operating the Fissure Gate on Uranus makes the gate available to anyone who schedules time to use it, assuming their Rep is good and they aren’t acting with commercial interests in mind. Any discoveries made via the Fissure Gate must be openly shared. The drawback to using the Fissure Gate is that the anarchists’ resources are limited. Gatecrashing operations are handled in a DIY manner, meaning that the operators may not be able to provide the support that certain expeditions need.

Resourceful parties may also rent gate time via Gatekeeper or one of the other hypercorp-controlled gates, though this tends to cost a small fortune. The more a group is willing to pay, however, the more time and support they will get.

When establishing an opening to a new location, several precautionary measures are taken. First, the gate area itself is evacuated and cordoned off with a defensive security perimeter, just in case anything hostile comes through. Then drones are moved in to push a micro fiberoptic camera through the gate to view what is on the other side. This is followed by a larger sensor package, evaluating environmental conditions. If the environment is not hostile, a tethered drone is then sent through to explore the far gate environs, trailing a hardwired connection back through the gate.

Most of the gate-controlling entities have established a system and infrastructure for making regular connections to extrasolar colonies and ferrying machinery and supplies through. Often this is handled by establishing very short connections, just enough time for a few people to transfer back and forth and/or to send a trainload of supplies through via tracks that run right up to the gate.

Unfortunately for many unlucky gatecrashers, gate transfers have proven to be both unstable and glitchy. Sometimes gates open to locations different from what is expected—and such new destinations are often hostile environments. Numerous personnel have entered one side of a gate only to never appear on the other side, despite those before and after them transferring through fine. On several occasions, wormhole connections have crashed mid-operation, sometimes as someone was stepping through, leaving them literally split in two on different worlds. In other instances, gate transfers have suffered horrible malfunctions, resulting in gatecrashers coming through the other side literally turned inside out, melded with their equipment, or pulped as if by massive gravitational forces. Some expeditions report that stepping through a gate has interfered with their equipment, disabling it or creating other problems. A few gatecrashers have also reported losing memories after a gate transfer. Most of these problems have been chalked up to difficult controls and an imperfect understanding of gate functions, but some conspiracy theorists suggest that outside forces may be influencing gate operations.

While the experience of passing through is instantaneous from an outside observer’s perspective, many gatecrashers report a subjective time lag, where it feels as though minutes, days, or even weeks or months pass before they exit. Reports have varied from experiencing this period as a calm, meditative state to spooky accounts of being lost in blackness and surrounded by unseen whispering entities or more hellish experiences of encountering monstrous presences. Though rare, some have passed through only to collapse in a gibbering heap, their sanity ripped away. A few report feeling that they have carried a presence with them ever since…

While the gamemaster can make use of any of these anomalies, they are also encouraged to use their imagination to generate truly creepy and strange experiences. At the same time, gamemasters shouldn’t make such experiences so prevalent that the players resist entering any gates or the novelty of such events runs dry.

Retrieved from "https://eclipse-phase.fandom.com/wiki/The_Pandora_Gates_1e?oldid=636"
Community content is available under CC-BY-SA unless otherwise noted.