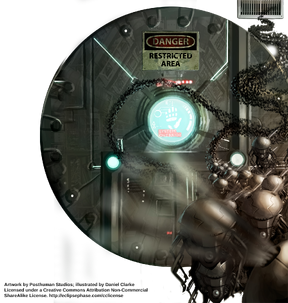 The swarmanoid is not a single shell per se, but rather a swarm of hundreds of insect-sized robotic microdrones. Each individual “bug” is capable of crawling, rolling, hopping several meters, or using nanocopter fan blades for airlift. The controlling computer and sensor systems are distributed throughout the swarm. Though the swarm can “meld” together into a roughly child-sized shape, the swarm is incapable of tackling physical tasks like grabbing, lifting, or holding as a unit. Individual bugs are quite capable of interfacing with electronics.
Swarmanoid Special Rules
Enhancements: Access Jacks, Basic Mesh Inserts, Cortical Stack, Cyberbrain, Mnemonic Augmentation, Swarm Composition
Mobility System: Walker (2/8), Hopper (4/20), Rotor (4/32)
Aptitude Maximum: 30
Durability: 30
Wound Threshold: 6
Advantages: See Swarm Composition
Disadvantages: See Swarm Composition
CP Cost: 25
Credit Cost: Expensive

Skinwalker: This morph is rough to adapt to, but not usually for the reasons people think. Yeah, the sensory input is overloading, and simultaneous lack of a substantial body and the possession of thousands of small ones is a serious acclimation hurdle. What gets most people, though, is the frustration. Being severely limited in what you can physically do, from holding a cup to opening a door, tends to aggravate people and compound the alienation.
Voight-Kampff: I think that’s probably why you see a lot more AGIs using these when they want something that can operate physically. For them, it’s almost the opposite experience: you go from experiencing millions of things simultaneously to just a few hundreds to thousands of inputs, but it beats sleeving into something even less able

The smart swarm is a robust attempt to get more utility out of the swarmanoid morph design. It makes use of larger modular minidrones (rather than microdrones) that can lock together into various shapes, enabling limited physical actions and tool use.
Enhancements: Add Modular Design, Smart Swarm
Mobility System: Shaped Swarm 2/16
CP Cost: 30
Credit Cost: Expensive (minimum 30,000)


Stitch: I know an AGI engineer who is a real master at using smart swarms. I've seen them shape mechanical structures like a track of ball bearings in order to slide something along. They're also good at taking advantage of the environment to create more leverage, like an improvised pulley. It takes a lot of skill to pull those kinds of tricks off, though.

Retrieved from "https://eclipse-phase.fandom.com/wiki/Swarmanoid_1e?oldid=416"
Community content is available under CC-BY-SA unless otherwise noted.