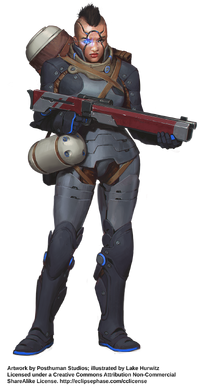 Parallax: Ah, the good old toy soldiers ﬁelded by so many pre-Fall militaries and then exploited by the TITANs during the Fall. I guess you can’t really fault the old Earth governments too much, they seemed like a good deal. They were loyal, durable, looked near enough to human that people didn’t complain too much, followed orders, and even sometimes had actual human egos in them. They lost popularity, of course, after the TITANs took over legions of sec pods and used them to commit all sorts of atrocities, but they’re making a comeback.
Rivet: Some people have the misconception that these were always directly controlled by the TITANs. Not true. It was common for them just to reprogram the AIs. So be careful about any sec pods you come across in long-lost or out-of-the-way habs, where some of them still linger.

Retrieved from "https://eclipse-phase.fandom.com/wiki/Security_Pod_1e?oldid=375"
Community content is available under CC-BY-SA unless otherwise noted.