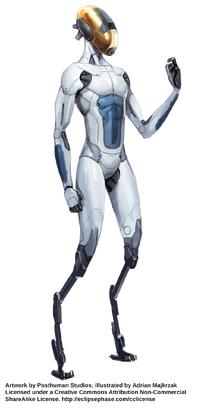 
Rivet: As a newer design, savants are still pretty hard to come by anywhere outside of Neptune.
Qi: A few inner system corps have taken the savant’s open source designs and are rushing out their own models, but some autonomist hacker groups have taken offense to that sort of proﬁteering and are seeding several viruses that only affect various proprietary models around the inner system.
Callosum: In my experience, the accelerated intelligence neural modeling in synths like this (and also certain eidolons) is a bit more prone to bugginess than wetware smart morphs. You tend to see higher rates of eccentricity and neurodiverse behavior.

Retrieved from "https://eclipse-phase.fandom.com/wiki/Savant_1e?oldid=410"
Community content is available under CC-BY-SA unless otherwise noted.