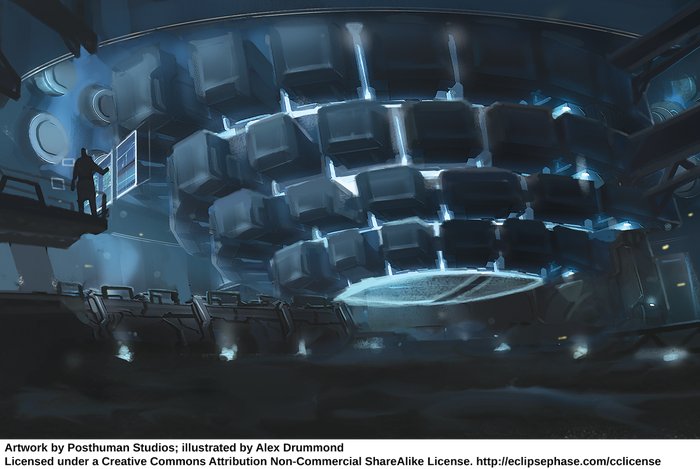 Congratulations, you’ve been assigned to check on what we all sincerely hope to be one of the most pointless places Firewall has ever built. Redoubt is a marginally habitable exoplanet around a small orange star roughly 17,000 light years from Earth that’s accessible via the Fissure Gate. Three teams of gatecrashers loosely associated with Firewall were assigned to locate suitable worlds for refuges, and four years ago one of these teams discovered this planet. When the team reported their results, some vectors falsified the report of this gate address so that it appeared to lead to a large asteroid that orbited a pulsar and so was regularly blasted with extremely high levels of radiation—in short, a destination no one would ever bother to visit a second time.
Soon after its discovery, construction began on the location known only as Refuge B. This site exists as one of a handful of ﬁnal and exceptionally secret holdouts for humanity. Each refuge is slightly different, so we have the maximum chance of avoiding whatever destroyed transhumanity in the solar system.
Refuge B is a cavern slightly more than half a kilometer below the surface in a tectonically stable region. It’s roughly circular, with a diameter of 4 kilometers and a height of 1 kilometer. The interior took three years to complete and is based on the same nanotech used in Hamilton cylinder habitats. The original tunnel has been ﬁlled in, so there is no easy access from the cavern to surface. No energy emissions from it reach the surface. Even if a horde of exsurgents swarm though this planet’s gateway after eradicating transhumanity, our hope is that they won’t see anything worth destroying.
There’s a decent chance that you’re already in Refuge B—or, at least, a fork of you in cold storage. Over two million egos are stored here, a small fraction of which are Firewall operatives. Remember how you agreed to allow Firewall to keep a backup of you in case you and all of your more standard backups were destroyed or compromised? This is one of the places they keep a set of those backups. There are also a few volunteers backed up here—their egos donated by allies that were approached by our operatives for this purpose. The vast majority, however, are egos that Firewall otherwise “acquired.” Most of these were rescued from derelict habs or soul-trading rings, though a substantial chunk are infugees from the Fall that never found a hab willing to take them. Others are drawn from cortical stacks Firewall has collected from various instances and other nebulous sources.
The purpose of your visit is to conduct a periodic check-in. Once a year, we transmit a trigger signal to the refuge via a QE communicator. This signal activates a drone that digs up to the surface, carrying a communication cable. This cable is used to establish a hard-wired connection to a set of air-gapped equipment within the refuge.
Your beta fork will be transmitted to the refuge, where it can sleeve into a synth. Your job will be to review the facility logs and make certain that everything there is functioning appropriately. You’ll also download a new batch of data via the comms cable that includes updated data on transhumanity and new egos for storage. This data is stored on computers that are physically separated from the local network, so there’s no chance of any harmful software contaminating Refuge B. The goal of these reports on major events of interest in the solar system and technological developments is to hopefully provide the people stored in the refuge with hints of the possible trouble that led up to their being awakened. After you check the systems and store the new data, your fork will transmit back up the cable, which will then be buried again until the next check-in.
While you won’t remember any of this, if things ever fall apart in the solar system, you’ll hopefully wake up here. If no one visits the sanctuary for 50 years, Refuge B activates, growing or constructing bodies for 500 stored Firewall operatives who then review the records left by the last visitors and decide what to do next. The most likely next step is then to start waking everyone up and bringing the refuge up to full operational status. Currently, Refuge B has facilities to house approximately one million individuals sleeved in morphs and several times that number of infomorphs, and it can expand as needed. It also contains complete backups of all recorded human knowledge as well as templates for all known technologies and lifeforms as well as almost 100 large cornucopia machines. Accidental activation is possible but very unlikely, so if Refuge B ever activates, either something drastic has likely happened in the solar system or gate travel to Redoubt has for some reason become impossible.

Retrieved from "https://eclipse-phase.fandom.com/wiki/Redoubt_1e?oldid=487"
Community content is available under CC-BY-SA unless otherwise noted.