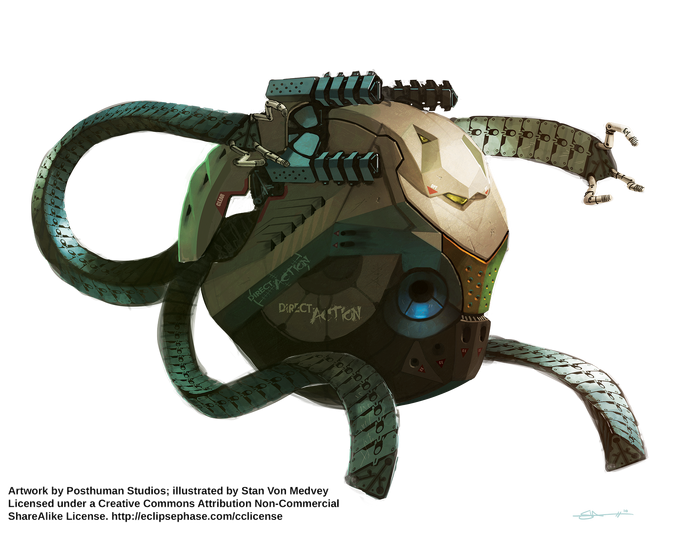 The reaper is a common combat bot, used in place of biomorph soldiers and typically operated via teleoperation or by autonomous AI. The reaper’s core form is an armored disc, so that it can turn and present a thin profile to an enemy. It uses vector thrust nozzles to maneuver in microgravity, and also takes advantage of an ionic drive for fast movement over distance. Four legs/manipulating arms and four weapon pods are folded inside its frame. The reaper’s shell is made of smart materials, allowing these limbs and weapon mounts to extrude in any direction desired and even to change shape and length. In gravity environments, the reaper walks or hops on two or four of these limbs. Reapers are infamous due to numerous war XPs, and bringing one into most habitats will undoubtedly raise eyebrows, if not get you arrested.
Enhancements: 360-Degree Vision, Access Jacks, Anti-Glare, Basic Mesh Inserts, Cortical Stack, Cyberbrain, Cyber Claws, Extra Limbs (4), Magnetic System, Pneumatic Limbs, Puppet Sock, Radar, Reflex Booster, Shape Adjusting, Structural Enhancement, T-Ray Emitter, Weapon Mount (Articulated, 4), Mnemonic Augmentation
Mobility System: Walker (4/20), Hopper (4/20), Ionic (12/40), Vectored Thrust (4/20)
Aptitude Maximum: 40
Speed Modifier: +1 (Reflex Booster)
Durability: 50 (60 with Structural Enhancement)
Wound Threshold: 10 (12 w/Structural Enhancement)
Advantages: 4 Limbs, +5 COO, +10 REF (+20 with Reflex Booster), +10 SOM, Armor 16/16
CP Cost: 100
Credit Cost: Expensive (minimum 50,000+)


Rivet: As advertised. For when you absolutely, positively gotta kill every last motherfucker in the hab. Accept no substitutes.
Pivo: I think a lot of people forget that reaper variants constantly rank near the top for major shell manufacturers each quarter. Looking around, you don’t see very many, and they’re kind of a pain to sleeve into, but lots and lots of corps and habs have a handful they use for security that spend most of their time in storage or patrolling far from prying eyes.
Parallax: I know this will piss off a lot of the Direct Action fanbots, but, for my money, unless all you’re going to be doing on an op is killing and destroying, you’re better off going with something a little more multipurpose. These things are a little too one note for me.

Retrieved from "https://eclipse-phase.fandom.com/wiki/Reaper_1e?oldid=408"
Community content is available under CC-BY-SA unless otherwise noted.