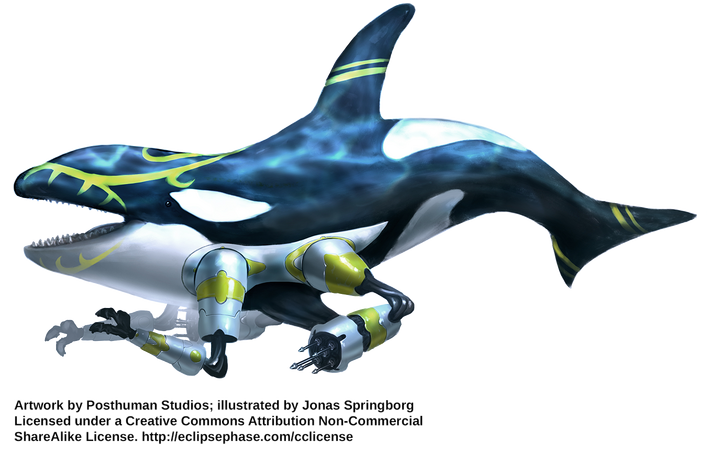 
Shark-Souled: Having seen the morph variants tailored for neo-avians, neo-octopi, and neo-hominids, a lot of neo-orcas are clamoring for something more updated. There’s nothing wrong with the neo-orca morph per se, but there’s only so much dermal plating and enhanced muscles can do.
Cacophonous: By “a lot of neo-orcas,” you mean Rising Tide, yes? They’re not satisﬁed with how many innocents they can kill with a multi-ton biological killing machine anymore?
Shark-Souled: Not just Rising Tide, though this is an issue they’ve been using to garner new recruits. In fact, a lot of uplifted cetaceans feel we’ve gotten the short end of the stick when it comes to morph variety.
Cymascopist: She’s not wrong, other than the surya most of our options are just genetweaked versions of the originals. The neo-orcas are just being a little more assertive about it than the rest of us.

Retrieved from "https://eclipse-phase.fandom.com/wiki/Neo-Orca_1e?oldid=340"
Community content is available under CC-BY-SA unless otherwise noted.