Callosum: Even though some body banks lump the neo-hominid species together, it’s worth knowing that they don’t all feel the same.
Skinwalker: Bonobo neural architecture and natural hormonal levels are not for the inexperienced. If you’re new to the morph, you may want to request the special cocktail of hormones that brings their responses more in line with human norms. If you think you want to go “full bonobo,” then step down off the inhibitors over a period of days; don’t try to cold turkey it.
Sun Bu’er: While chimps are probably the most numerous and bonobos the most notorious, the orangs often get overlooked. Truth is, all the neo-orang uplifts I’ve ever known are totally mellow gals and guys. Having sleeved into an orang on a skeleton crew mining op once , I can see why. The morph is just so smooth and easy, the closest I can come to it in my splicer is when I’m doing tai chi; it just ﬂows. You’re powerful but not obvious about it. 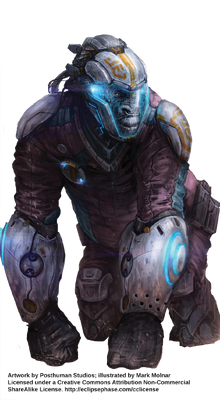 
Moxie Harper: The prevalence of gorillas in certain pop culture products has made this a popular morph among those that want to project a certain air of toughness and, dare I say, badassery without having to go synth.
Cacophonous: Uplifted homs in general, and particularly uplifted gorillas, have been dealing with the backlash of these media depictions. A lot of people see neo-gorillas and automatically think they’re thugs or mobbed up with some syndicate.

Retrieved from "https://eclipse-phase.fandom.com/wiki/Neo-Hominid_1e?oldid=339"
Community content is available under CC-BY-SA unless otherwise noted.