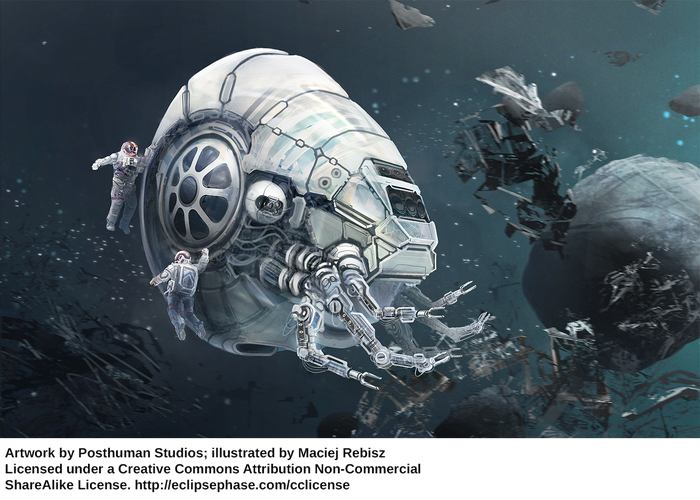 Nautiloids are a hybrid of short-range spacecraft and submersible capable of holding up to six passengers and their gear. The morph is shaped like a van-sized nautilus, with crew space in the head and shell. A cluster of tentacular limbs mounted under the observation ports in the head provide both ﬁne and brute force manipulation. Originally created for comet and asteroid mining, the design also proved useful for oceanic exploration by gatecrashing teams and Europans.
The morph’s interior includes a desktop cornucopia machine and a maker. It can deploy a pair of retractable pontoons for stability when ﬂoating on a liquid surface. A nautiloid’s life support system can support its occupants for up to three months before replenishing—indefinitely if it has a source of hydrogen and oxygen. Nautiloids include radiation shielding, a small airlock, and a healing vat.
The nautiloid is also available as a bot with no cyberbrain for the same cost. The bot version has no aptitude bonuses.
Enhancements: Basic Mesh Inserts, Cortical Stack, Cyberbrain, Echolocation, Extra Limbs (8 Arms, 2 Tentacles), Hydrostatic Pressure Adaptation, Industrial Armor, Internal Rocket, Mnemonic Augmentation, Pneumatic Limbs (2 of the Arms), Puppet Sock, Radar, Radiation Sense, Swim Bladder, Telescoping Limbs (2 of the Arms), T-Ray Emitter
Mobility Systems: Internal Rocket 8/40, Submarine 8/40
Aptitude Maximum: 30
Durability: 200
Wound Threshold: 40
Advantages: +5 SOM, +5 to two other aptitudes of the player’s choice, Armor 10/10 (20/20 with Industrial Armor)
Notes: Very Large Size trait
CP Cost: 155
Credit Cost: Expensive (150,000)


Delta-V: Something about carrying a crew around inside me really triggers my mothering instincts.
Psychscaper: That’s intentional. It’s a feature added to many vehicle cyberbrains; the urge to protect helps avoid situations where you forget about passengers entirely, to their detriment.

Retrieved from "https://eclipse-phase.fandom.com/wiki/Nautiloid_1e?oldid=405"
Community content is available under CC-BY-SA unless otherwise noted.