This morph is a version of the exalt morph that has been adapted to fly in Earth normal air pressure as long as the gravity is 0.2 g or less. Though this morph is available on other low-g worlds and habitats, it was developed for and is primarily found on Luna. This morph resembles a typical exalt morph, except that it is lightly built, has larger lungs, and has feathered wings with a wingspan of 3 meters. The wings come out of the back torso and leave the morph’s hands and wrists unhindered. The wings may also be folded behind the body.
Implants: Basic Biomods, Basic Mesh Inserts, Clean Metabolism, Cortical Stack, Enhanced Vision, Wings
Aptitude Maximum: 30
Durability: 30
Wound Threshold: 6
Advantages: Flight (Movement Rate 8/40), +5 COG, +5 COO, +5 to two other aptitudes—player’s choice
CP Cost: 35
Credit Cost: Expensive 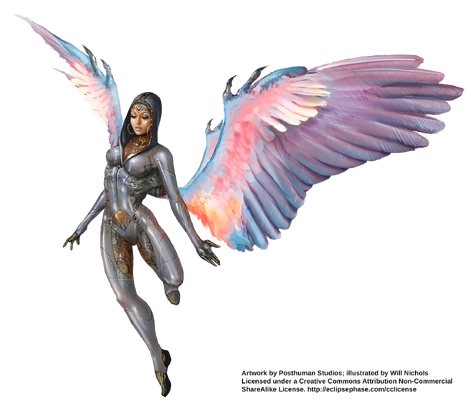 Nezumi: These are exploding in popularity. I’ve seen them all over low grav habs in the Belt and rimward.
Skinwalker: The wings are a bit clumsy to handle sometimes, especially in conﬁned quarters, and I’ve had some uncomfortable back aches after ﬂying too long. I prefer morphs that integrate the wings and arms together.
Expat: A hypercorp called FormeVital has a lunar ﬂier model with wing-arms.

Retrieved from "https://eclipse-phase.fandom.com/wiki/Lunar_Flier_1e?oldid=332"
Community content is available under CC-BY-SA unless otherwise noted.