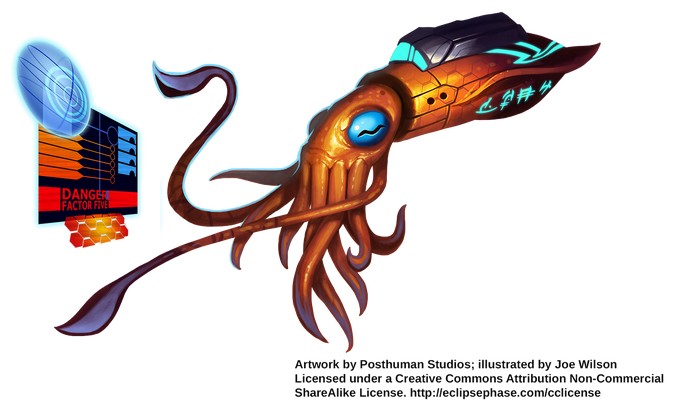 Given the popularity of octomorphs even among nonmercurials, morph designers have sought out a similar morph that is operable in zero g and also designed for speed. Its streamlined form resembles a stylized squid and this morph can move swiftly in both water and air. It can suck either water or air into a cavity in its mantle and then expel it out a siphon in a chosen direction for fast, jet-like propulsion. While popular with neo-octopi, its speed and overall utility has made it an increasingly favorite option with others seeking an aquatic-adapted morph.
Implants: 360-Degree Vision, Access Jacks, Basic Mesh Inserts, Chameleon Skin, Cortical Stack, Cyberbrain, Extra Limbs (8 arms, 2 tentacles), Grip Pads, Hydrostatic Pressure Adaptation, Mnemonic Augmentation, Polarization Vision, Puppet Sock
Movement Rate: Submarine (4/36), Thrust Vector (4/28)
Aptitude Maximum: 30
Durability: 40
Wound Threshold: 8
Advantages: 8 Arms, 2 Tentacles, +5 COO, +5 SOM, +5 to one other aptitude of the player’s choice, +30 Swimming skill, Beak Attack (1d10 + 1 DV, AP –1), Limber (Level 2) trait
Disadvantages: Social Stigma (Pod) trait
Note: Non-Mammalian Biochemistry trait
CP Cost: 55
Credit Cost: Expensive (minimum 60,000+)


Delta-V: Quite an interesting ride, but useless in any non-aquatic environment with gravity.
Pivo: You hear about that situation on Atlantica? A certain neo-whale there ate a couple of folks sleeved in ﬂying squid morphs. They claimed they couldn’t tell ‘em apart from their non-sapient squid feedstock. Word on the waves is that some sort of black market deal went sour.
Expat: I know some reclaimers who came across a group of ﬂying squid morphs while doing recon on Earth, looking for a deep sea sanctuary. The squid scattered before they could make contact. Interesting thing is: these morphs were ﬁrst designed after the Fall. So why are they showing up on Earth?

Retrieved from "https://eclipse-phase.fandom.com/wiki/Flying_Squid_1e?oldid=367"
Community content is available under CC-BY-SA unless otherwise noted.