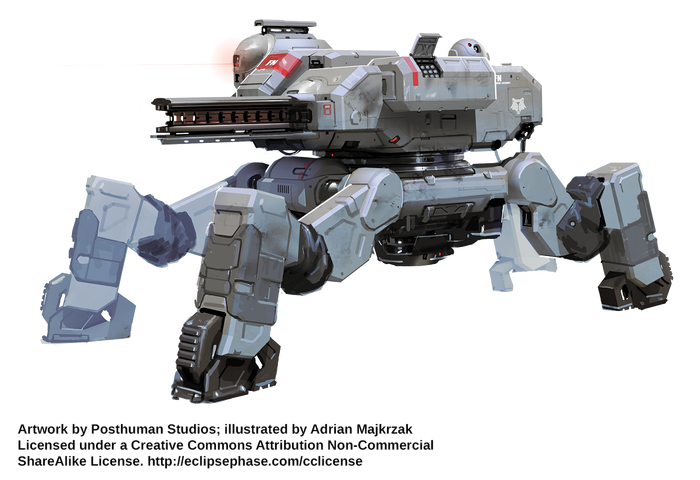 Named for the monstrous wolf of Norse legend, the fenrir is one of the most imposing combat morphs ever developed. It is found only in the armed forces of the Hyoden city-state on Callisto (though black market blueprints/copies are rumored to be available elsewhere). A massive, squat quadrupedal morph designed to be operated by up to six egos simultaneously, the fenrir is more akin to a super-heavy tank than a regular morph. It is possible that a single ego could ﬁll all six ego slots at once through the use of alpha forks, but this has never been tested. The most common weapons mounted are linked HEAP and/or plasmaburst seeker launchers, exoatmospheric plasma beam bolters, and machine railguns loaded with AP rounds.
Note: This morph is unique in that it allows more than one ego to use it at the same time. Ego Sharing may be purchased for this morph an additional four times, for a total of ﬁve additional egos.
Enhancements: 360-Degree Vision, Access Jacks, Anti-Glare, Basic Mesh Inserts, Cortical Stack, Cyberbrain, Direction Sense, Ego Sharing (1), Enhanced Hearing, Enhanced Vision, Extra Limbs (4), Heavy Combat Armor,Lidar, Mnemonic Augmentation, Pneumatic Limbs, Radar, Structural Enhancement, T-Ray Emitter, Weapon Mount (External, Articulated, 8)
Mobility System: Walker (4/20), Thrust Vector (4/12)
Aptitude Maximum: 35
Durability: 70 (80 with Structural Enhancement)
Wound Threshold: 14 (16 with Structural Enhancement)
Advantages: 4 Limbs, +5 REF, +5 COO, +10 SOM, +5 to one other aptitude of the player’s choice, Armor 16/16 (32/32 with Heavy Combat Armor)
Disadvantages: Large target (+10 to hit)
CP Cost: Not available at character creation
Credit Cost: Expensive (rare and restricted; minimum 100,000+)


Cacophony: Another that didn’t make the regular guide…
Parallax: For those missions when nothing less than total slaughter will do.
Tio Silencio: If your mission gets that bad, someone wasn’t doing their job.
Qi: Last I checked, transhumans still made mistakes. Let’s just hope our enemies do too.
Nevermore: Unfortunately, if you really need a morph like this on an op, you are unlikely to have one on hand.
Ruqinzhe: You haven’t met my router. I’m pretty sure she’s prepared for a supernova.

Retrieved from "https://eclipse-phase.fandom.com/wiki/Fenrir_1e?oldid=739"
Community content is available under CC-BY-SA unless otherwise noted.