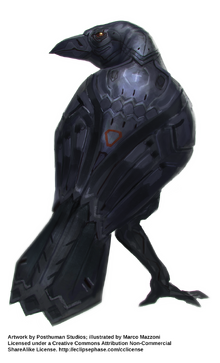 
Nezumi: I’ve sampled neo-avian morphs before, and this was quite a ride. Can’t say I’d favor it, but it deﬁnitely does what it does well.
Nevermore: As a neo-corvid, I was quite pleased to see this model hit the market. There’s an unfortunate lack in synthmorphs tailored to our peculiarities—and to uplift sensibilities in general.
Nova Vida: I took one of these for a spin for an exoplanet recon op; it was great. I ﬂew undetected and followed the targets for kilometers. Unfortunately, one of the the local ﬂying carnivorous fauna specimens mistook me for a morsel, so I lost ‘em. Hope I gave the bugger indigestion.

Retrieved from "https://eclipse-phase.fandom.com/wiki/Blackbird_1e?oldid=734"
Community content is available under CC-BY-SA unless otherwise noted.