Sometimes we get really lucky; Balani is one of those cases. You’ve never heard of this system for a very good reason. The world was ﬁrst discovered during one of the various hypercorp efforts to send automated probes through the Martian Gate to dozens of gate addresses to see which ones were worth further exploration. A group of vectors gained access to the survey ﬁrst, and when they saw what looked like a blasted world that once held intelligent life, they decided to replace this information with data on an entirely boring and commonplace baked rockball. Having convinced everyone the exoplanet was worthless, a Firewall front group was brought in to purchase exclusivity rights (even paying the dead-end world rate, this is not the sort of thing we can do very often) and a team of sentinels was sent to investigate.
There is no evidence that the TITANs ever visited Balani, but we now have access to a world that was inhabited until relatively recently and where we know exactly how the inhabitants died. 18,000 years ago, Balani was home to an advanced civilization. These sapients were roughly human sized, had six limbs, and were radially symmetrical. Their technology was different from ours and in some ways, it seems to have been more advanced—particularly with the biosciences. They don’t seem to have done much with the sorts of mechanically based nanotechnology we use, but they deployed tailored bacteria for many of the same purposes. 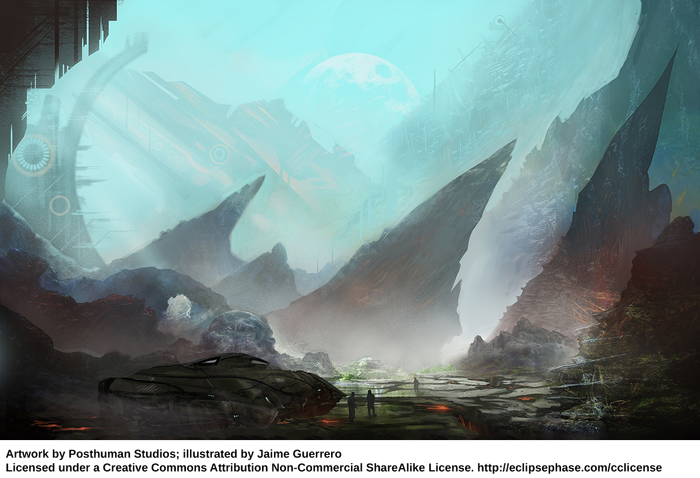 Then, something happened. Maybe it was an accident, maybe it was terrorism or war, or perhaps they had their own TITANs who saw an easy way to wipe out these sapients. We don’t know why, but we know what happened. Some type of bacterial nanotech got loose, something in the vein of a universal ﬂesh-eating organism, like alien ebola on steroids. Of course, nothing is truly universal, but it devoured the Balanis and almost all other complex land-based life on the planet. This in turn wrecked the ecosystem, leading to major climate change and large-scale death of much of the plant life. Today, Balani is in the ﬁrst stages of recovery from a catastrophe where more than 80% of all animal life on land died and more than 66% of all aquatic life died. In short, its ecosystem is still a mess. From our point of view, Balani was never a paradise. Even before the die-off, it was too hot, with temperatures averaging 40 to 65 C across most of the two large land masses. The air was too thick and it contained almost 3% carbon dioxide. Now, the air is slightly more than 5% carbon dioxide and there’s only 70% as much oxygen in the atmosphere as there was 18,000 years ago. To stay here, you either need to sleeve in a synth or have some lung augmentation, otherwise Balani will kill you slowly and you’ll feel wretched every minute that you’re here. Of course, this different environment also has one big advantage: while Balani life is chemically very similar to us, it’s sufﬁciently different that their bacterial ecophage has no effect on any Earth-derived life.
Firewall’s main interest isn’t the climate, of course. We want to get a heads-up on the technology here and are speciﬁcally interested in determining if the Balanis had their own TITANs or made use of the Pandora gates. We know they sent partially organic space probes to all of the worlds in their star system, and we have plans to explore a surviving space station and a small base they built on one of their two moons. They were at least 50 years behind us in space technology, so almost no one was able to ﬂee the planet when the ecophage started taking the Balanis apart; the space stations and moon base were too small to survive on their own. After 18,000 years, their cities are all ruins, but so far our exploration teams have uncovered ﬁve sealed facilities that are in surprisingly good shape. Though each of these refuges was sealed to survive the ecophage apocalypse, these sites have unfortunately raised more questions than they’ve answered. Three of the bunkers contained Balani remains, but we haven’t yet determined why the survivors died. The other two, even more intact, seem to have been completely empty of life.
The bacterial strain that devastated their planet is also undergoing study. While our own nanotech is in many ways more advanced and can be used to build or modify non-organic materials, their ecophage is self-replicating in a way that nothing but exsurgent tech can manage. Pockets of the strain remain active in some areas, which is an ongoing concern. Our teams are careful to monitor that it does not adapt to being effective against Earth-based biologies—while we want to understand the risks of unleashing such a green goo threat, we don’t want to unleash it on ourselves.
Given the potential dangers, it is critical to Firewall’s interests to keep Balani a secret. We don’t want anyone else mucking around there, getting a hold of samples of the ecophage, and bringing them back to our solar system. Currently, we have a team of 18 operatives working on Balani, and we likely need more. We’re also hoping to ﬁnd a path to Balani via the Fissure or Portal gates, since that would allow more secure access to this world and make it easier to maintain a large presence there.

Retrieved from "https://eclipse-phase.fandom.com/wiki/Balani_1e?oldid=481"
Community content is available under CC-BY-SA unless otherwise noted.